His girlfriend’s probably surfing somewhere in California right now. She is an astrophysicist and a veteran, but she’s never been up in space, like he is now, in a failing spacecraft. He knows it’s failing by the way the engine sounds, like a tennis shoe in a dryer, he presses the button. Untethered, he waves to his surfing board as it cartwheels through space. As he, himself, cartwheels through space. He squinches his eyes shut. Jane would tell him not to be afraid, that this is an infinite universe and in an infinite universe all things are mathematically possible, even certain. And so he imagines his pretty girl, walking toward him on a boardwalk or even on Pluto or some star, a surfboard under her arm, saying see Space Man? See over to wave crypto. LOL !!! 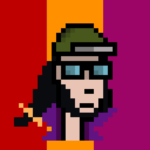 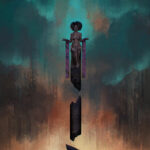